This week I’ll be posting some ideas and recipes on how to make a Vegan Afternoon Tea at home – starting with these dainty and delicious tea sandwiches!

The sandwiches are usually made using thin sliced white bread with the crusts removed and although the fillings vary, they’re kept light and delicate.

I chose to make the classic cucumber sandwich along with a roasted red pepper & pesto sandwich and a caramelised onion & hummus sandwich.

How to make the perfect finger sandwiches:

When making vegan sandwiches, you are really forced to think outside of the box as most of the classic sandwich flavours include meat or dairy of some kind. Here are a few more ideas for vegan sandwich fillings…

To keep for later, spray or sprinkle, very lightly, with a splash of water and cover with cling film. Keep refrigerated until serving.

Did you make this recipe? 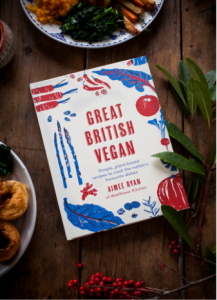 Whether you’re vegan, vegetarian or merely interested in cutting down on your meat consumption, there’s no reason you can’t still indulge in all your favourite British classics, using easy-to-find ingredients. Reimagine over 80 classic British dishes.

Hi! I’m Aimee, the recipe creator, writer and photographer behind WallflowerKitchen.com as well as the author of ‘Great British Vegan’ my cookbook where I share easy vegan-friendly recipes for classic British comfort food.